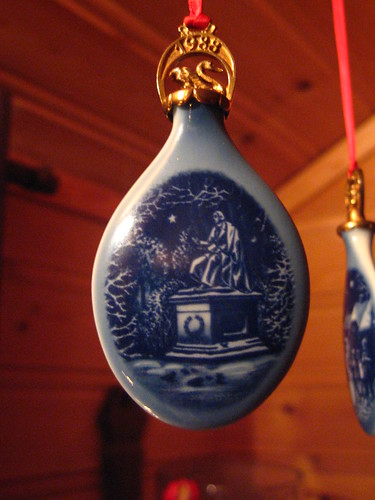 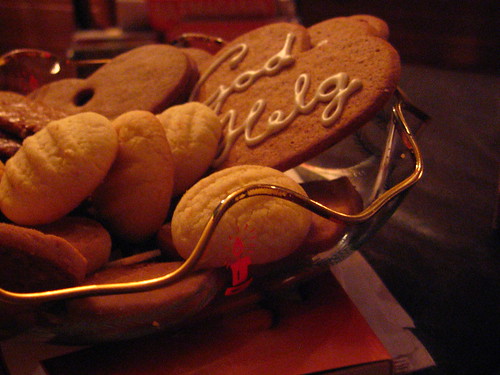 Christmas is almost over, and these are some of the few Christmas cookies that are still left. All on the serving plate are home-made, except for the gingerbread hearts that for some odd reason say "Have a nice weekend". o_O Also, I've been playing around with the Digital Macro functions on my camera, and I find that I love taking pictures that way! 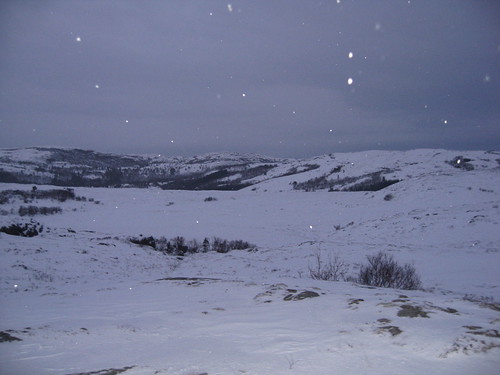 When skiing with the dogs today I noticed how pretty my regular route is when covered in snow. At the bottom of the farthest hill is my destination for most of my trips with them, though I wary between a few ways to get there. :)

As pointed out to me by

libby_drew when browsing my flist a few days ago:

Share the love with our $10 holiday coupons! If you're a Paid or Permanent user, you can send up to 10 Basic or Plus users a $10 coupon to upgrade to a one year paid account.

Recipients can upgrade for $9.95 (instead of $19.95) for one year by enrolling in our automatic payment plan or make a manual payment of $15 (instead of $25). Please note that these coupons are not transferable and cannot be used to renew existing paid accounts. Recipients must specifically decline the Holiday coupon in order for it to be credited back to the sender.

So... Anyone with free accounts who want to try out a paid account for $10 off? Just let me know. :)

Edit: I think most of my flist already pay for their accounts, but as far as I understand it doesn't have to be anyone on there. Point people this way if you know anyone who wants to get a paid account a bit cheaper! :]

Honestly, this is taking things TOO far. The one with the white flower is the UK edition, the red the US one.
Source US edition
Source UK edition

What's next, an edition of Romeo and Juliet with RPattz and KStew on the cover art?

Would've said more, but gotta run before my dad boss sees me LJ-ing at work!

I WATCHED HARRY POTTER & THE HALF-BLOOD PRINCE LAST NIGHT AND IT WAS FREAKING AMAZING!!!!

The pre-premiere was fantastic. The outdoors showing was all kinds of epic, when James and Oliver Phelps appeared there was an amazing set-up. It started with a woman screaming (mind you, it was all pretty quiet before that, despite ~1300 people waiting), then fire burst from the ground in several places (and this is a fortress, so imagine the mood!), then the twins were walking down this long path from a higher point of the fortress to the level we were on, with "Death Eaters" with torches leading the way. Then they talked a bit to the press, signed loads of autographs, introduced the movie (which I have video of -- will probably be able to put it up tomorrow when I get home!), then went back and signed more autographs, and -- get this --

SIGNED AUTOGRAPHS FOR MY SISTER AND ME, AND TOOK PICTURES WITH US!! I even got to talk a bit with them! Such sweet guys. And so sympathetic! I mean, they wanted to sign something for everyone waiting by the fence, so the movie was actually postponed 30 minutes or so. LOL

So, we sat outside, the movie was getting close to the end (Dumbledore and Harry in the cave), and what happens? THE SKY LIGHTS UP. Yes, that's right. Lightening I tell you! Or maybe that was earlier. I think maybe I've got it wrong, that it was the torrents of rain that started crashing down at that point in the movie! Anyhow, we had a few flashes of lightening first, then we got lightening followed by thunder, and then the sky was opening its floodgates and we were all scrambling to put on the rain ponchos the people responsible had put on the chairs beforehand. Yes, we watched the last 10-15 minutes of the movie with rain crashing down on us, lightening flashing across the sky, and thunder booming in the distance.

AND I LOVED IT!

We were soaking when we got back to the hotel, but thankfully it was very close to the fortress, only a five minute speed walk or something like that.

chica_chilena for the first time, she showed me and my sister around the fortress while it was open for everyone, and I met

trine_321 for the second time as I was standing by the fence waiting for the twins to arrive! She actually found my sister first, as they'd said hello the first time we met. ^_^ It was so good seeing both of them!


Proper Half-Blood Prince review will come tomorrow too, I think, because tonight my sister and I are back in Trondheim and going to the official premiere at 00:01! I absolutely cannot wait to see it again!! :D

Wow, I haven't updated in ages! I keep meaning to, but then I have so much other stuff to do these days. Proper update will come soon! And so will that music letter I mentioned earlier -- sometimes life just comes and kicks you in the ass real hard, and apart from stopping by Twitter to make short updates, I haven't been able to be on the computer at all these past few weeks. *eyeroll* Typical!

However, even if I haven't been here much lately apart from reading my flist (I do read you guys!) and commenting once in a while, I thought I'd make a HIATUS-post. Because I'm gonna be on hiatus till June 15th.

A friend and I are going to a Greek island called Zakynthos for a week, and we leave from Oslo in the wee hours of Sunday morning. :) No, you're not the only one who's never heard of that island, we hadn't either! But we liked what we read about it, and we got real cheap tickets when we decided this last Thursday, so off we go! Am now trying to finish packing as my boat (then bus) heading for Trondheim leaves in three hours. D: I always post-pone stuff till the last minute. Oy vey.

As we're doing this as cheap as possible, we're leaving from Oslo, as I mentioned. I've never gone on a charter from there before, I've always left from Trondheim. Anyways, this means I'll/we'll have a looong travel! First I leave my hometown today. An hour and fifteen minutes by boat, then ~3 hours by bus. Then I spend the night in my grandparents' apartment in the city, and at 11am tomorrow my friend and I meet up and we go by bus all the way down to Oslo. Which takes 7-8 hours. THEN. Then... we'll have to wait till 3am Sunday morning before we're allowed to check-in. LOL What a wait! They have a pizza place in the entrance hall, so I'm thinking LOTS of pizza will be consumed Saturday night. ;)


Okay, my short hiatus-update got sort of long, so I'll sign off now. Have to get that suitcase packed! :D

Apparently my attempt at updating with my cell didn't work, though I did try when it happened...

They played the song at the club we were at the moment it was clear that no other nation could catch up to us. It was so much fun!!


And now you'll have to excuse me, I just got home and I still have some drunkenness to sleep off before the parades and stuff tomorrow (Norway's "independence day"). Night all! ;)

WOW. To be honest, I don't like our finance minister all that much, but I have to admit she handled the financial crisis pretty well for Norway.

Norway Thrives by Going Against the Tide, article in the New York Times.

It was a really interesting read, actually, seeing it from an "outsider's" point of view. We still lost a lot of money, but because of that fund(? not sure if that's the right English word) they write about in the article it didn't mean we'd be too bad off anyways. I may not want to live in Norway always and forever, and I do criticize it oftenoccasionally because we're so tiny, get stuff later than a lot of other countries, and so on... But I do love my country, and I do realize how lucky I am to live here. It's just hard to remember sometimes. Good thing I can get wake-up calls like this one once in a while.

I'm not a big fan of techno music. Or dance, trance... You know the genre. Honestly I'm not sure what the difference is between the lot, so I just throw them all into the same bucket that I label dance/trance. However, when I go running there is nothing but dance/trance that makes me give my everything, exert 110%, run till my legs cramp up (which yes, has happened). I've tried rock, indie, punk, pop, everything... Nah. Won't work. So I do keep my ears out for that kind of music, so I can change out my current playlist once in a while. Currently it consists of five songs, and has been like that for two years. The two first songs are actually in my playlist twice. All the songs are 7+ years old. I need new stuff.

Though it may have sounded like it, that wasn't the point of this entry. Call it an introduction, if you like, a way of showing you how I feel about this sort of music.

Some months ago this artist suddenly caught my attention, this woman who calls herself Lady Gaga. Anyone heard of her? Yes, thought so. :) My immediate reaction was to blow her off when I heard Poker Face; not upbeat enough for me to run to, so nothing I need listen to either. But then, during Christmas, I went to this after party and the guys there were HOOKED on that song. They hit it up on YouTube, and played it over, and over, and over again. I felt like puking. However, one of the guys started doing this ridiculous dance to the song, while sitting down, and it completely cracked me up. And after that I would imagine him doing his silly dance whenever I heard the song, and unbelievably enough... THE SONG GREW ON ME.

Some time passed, and I got sick of the song as it was overplayed wherever I went. If I went shopping, at the gym, out dancing, background music at a friend's place... I couldn't escape it. Thankfully it's been gone for a while now, instead they play Dance Dance or whatever it's called. But today I came across a song on YouTube. This song was Poker Face. Still sung by Lady Gaga. But with Queen Latifah doing a rap in there. And Kristina liked it and all was good in the world.